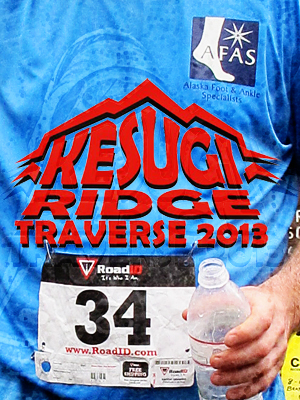 The race was a 28-30 mile trek through some of the best Alaska has to offer. The day was gray and overcast, but the cloud ceiling was higher than the ridge.

Beautiful vistas of the Chulitna and Susitna river valleys, and the Tokosha and Talkeetna mountains were present to the east and the west, but the great one, Denali, was veiled in clouds.

The rain was mostly a drizzle, however the previous two weeks were filled with constant moisture, and much of the trail was consequently under water.

A muddy, wet, slog, but only once did the water come higher than the knee. The alpine meadows high above tree line were red and yellow with the fiery glow of autumn. Wild blueberries dotted the trail, and filled piles of cold black bear scat.

The pain was great. One foot after another 30 miles with over 5,400 feet of elevation gain, past places like Stonehenge Hill and Point Golog. The race was much harder than the Crow’s Pass Crossing, but without the river crossing.

Coming in at 9:09, I dropped an hour and fifty minutes off my practice run three weeks ago when the trail was in good condition. The race was great, and the pain is good.